Developmental dysplasia of the hips

DDH, or ‘clicky hips’ as most people know it as, is a structural abnormality in the development of baby’s hip. Some babies are born with the defect which can be picked up at a hip check. However some, like Lily, get missed initially and don’t get picked up till later in their lives. Often it is picked up when children start to walk, and parents notice that the child has a limp or the child walks later in life than expected.

Luckily, sort of, I had concerns with Lily’s ability to jump in her jolly jumper and thought her legs were a different length when she was 4 months old. We were sent for an ultrasound at the hospital, and was told her left leg was permanently dislocated and therefore her hip hadn’t formed properly.

When Lily was 6 months old, she went into a spica cast – a cast from her nipples to her ankles. But, Lily quickly adapted and hasn’t minded being restricted. She is now 10 months and coming to the end of her spica journey. Lily’s hip has formed well and the specialist has said Lily shouldn’t need any further treatment. But she will be followed up until her adolescence. This is relatively minor compared to other children who have had numerous surgeries and casts. Also, if children are older when the deformity gets picked up, the children can be more upset as they can’t crawl, stand, or walk anymore.

Signs and risk factors for DDH include family history of DDH, first born, female, breech birth, leg length discrepancy, and uneven skinfolds on the legs or buttocks. If you have any concerns, make sure you talk to your plunket nurse or GP. If the deformity is picked up soon enough, the treatment is far easier on the child (and parents). 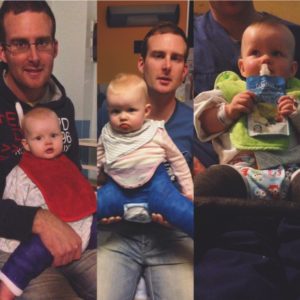